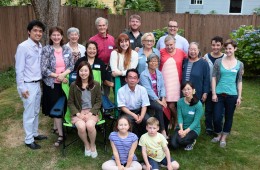 The last weekend of July has proven to be an eventful one for KTIO. On Friday, July 24th, our office gathered for a barbecue with the Seattle-Kobe Sister City Association to celebrate the Kobe Seafair Ambassador, Ms. Akane Kotani.

Earlier in the afternoon on Friday, July 24th, both KTIO and the Hyogo Business & Cultural Center attended a special Sendoff Reception for new members of the JET Program leaving to teach English and support local government throughout Japan. The reception was held at the residence of Seattle’s Consulate General of Japan, Mr. Masahiro Omura. A total of 64 new JET hirees will be leaving for Japan; five of the 64 will travel to Hyogo Prefecture, and two of those five will travel to Kobe. Of the JET hirees traveling to Kobe, they plan to work with both Hazetani Junior High School and Sakuranomiya Junior High School. 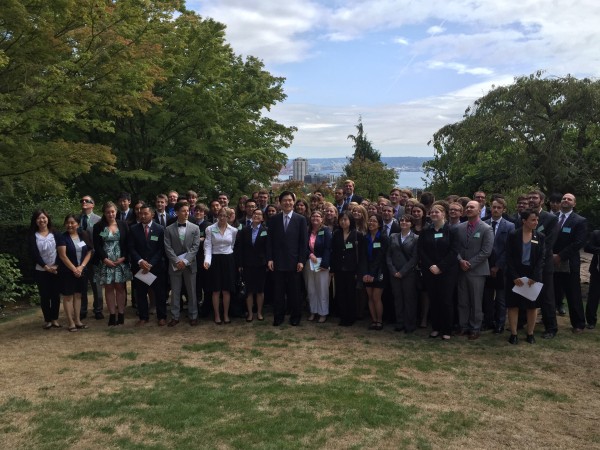 Below are photos of the Seafair Torchlight Parade on Saturday, July 25th: 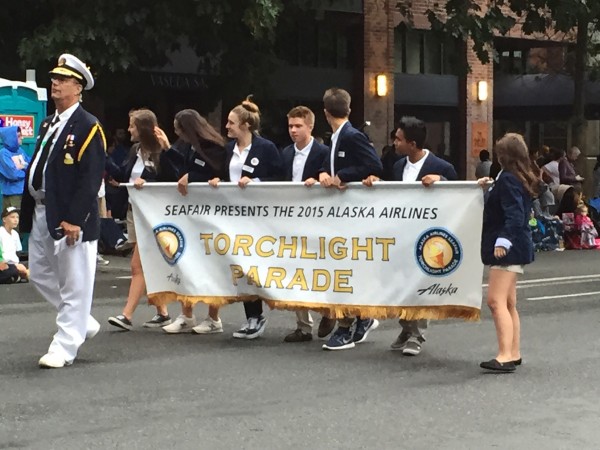 A photo of the beginning of the Seafair Torchlight Parade 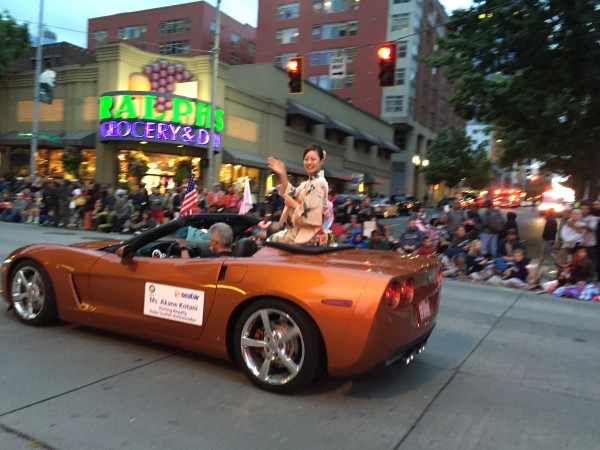 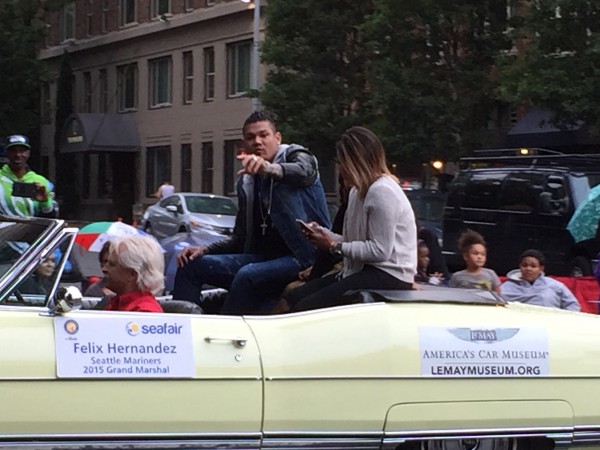 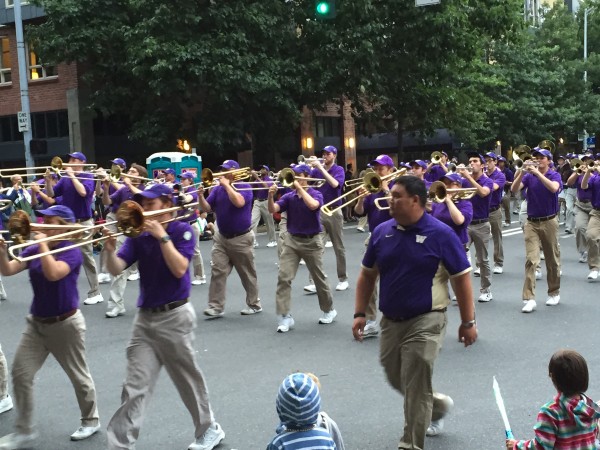 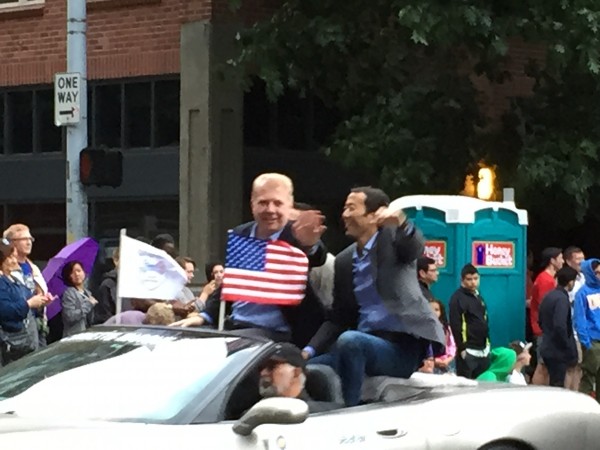 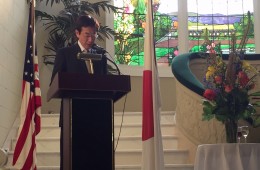 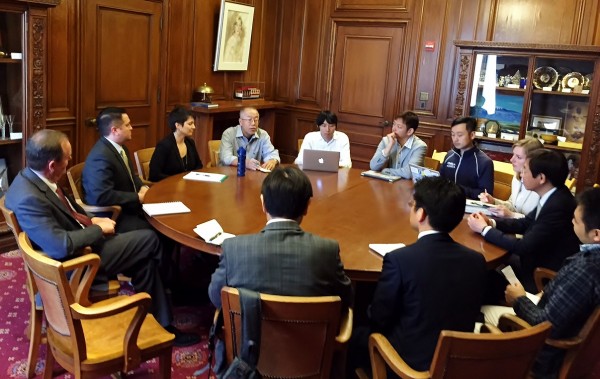 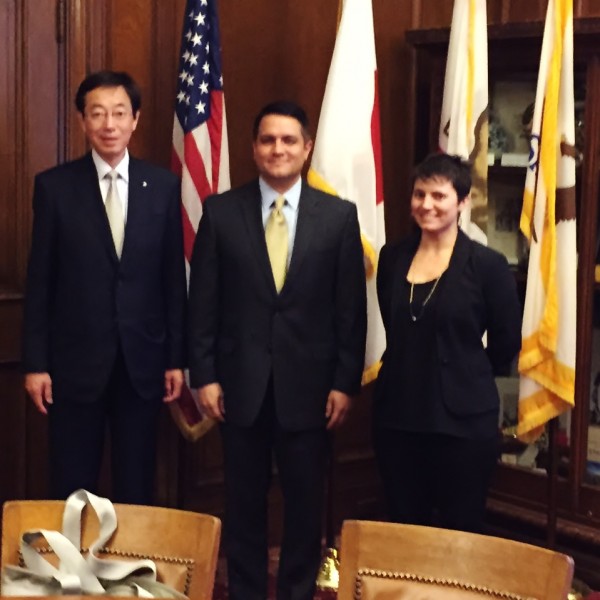 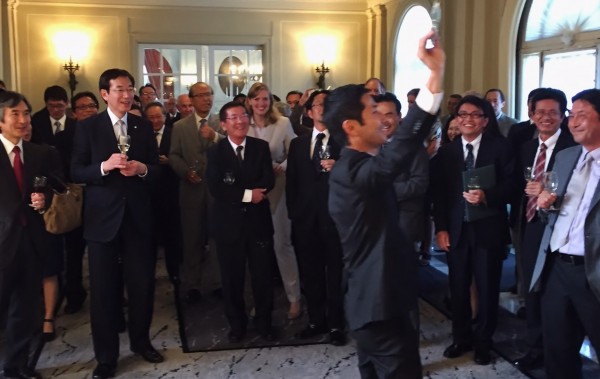 Mayor Hisamoto participating in a reception at the residence of Jun Yamada, San Francisco’s Consulate General of Japan

On Wednesday, June 17, Mayor Hisamoto met with Code for America. Code for America is non-profit organization that seeks to improve local communities by connecting open source technology with the transformation of government services. Mayor Hisamoto also met with Peter Hirshberg, a Silicon Valley entrepreneur that focuses on connecting modern technology with business growth. 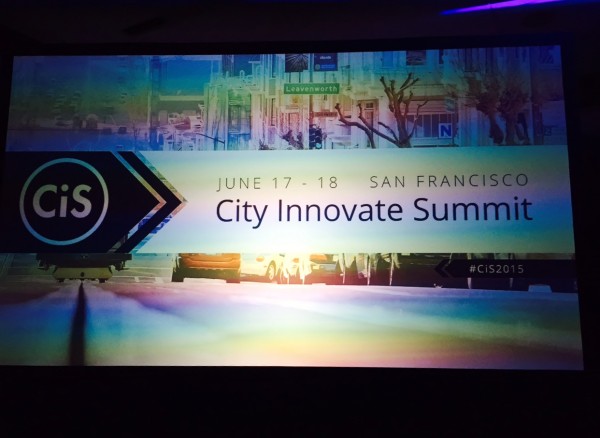 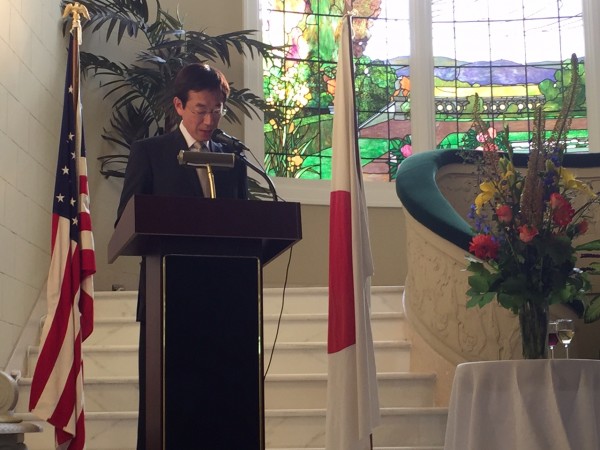 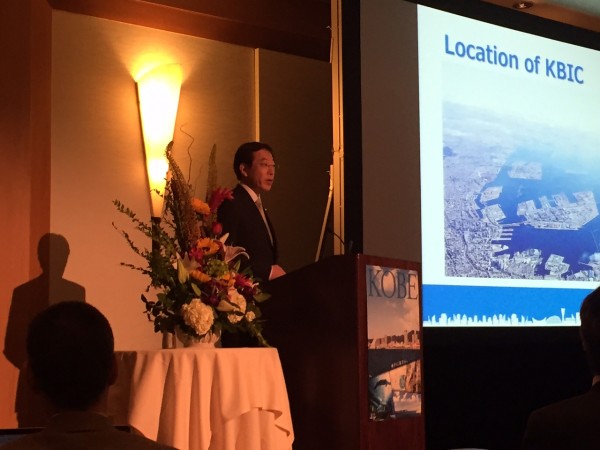 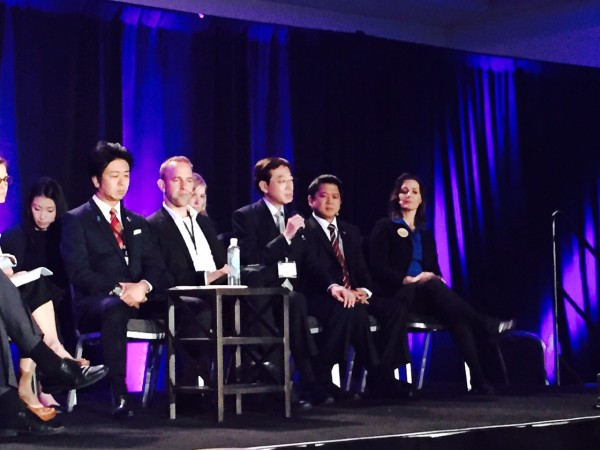 Kobe Trade Information office looks forward to future visits from Mayor Hisamoto, and will continue to post information regarding the results of Mayor Hisamoto’s exchanges with the local governments and organizations of Seattle, San Francisco, and the Silicon Valley. 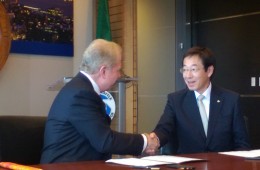 On June 11th, a delegation from Kobe joined KTIO’s Director Tetsuya Sometani in assisting Mayor Kizō Hisamoto with a visit to San Francisco, Silicon Valley, and Seattle. Mayor Hisamoto has come to the West Coast with a deep interest in collaboration between aerospace, biomedical, IT, and community programs in both Washington state and California. Since arriving on the 11th, Mayor Hisamoto has met with numerous organizations and progressive thinkers–including Apple,  startup investment organization “500 Startups,” and Seattle’s own Mayor Ed Murray. Mayors Hisamoto and Murray met for the signing of an agreement that will foster partnership and exchange between Seattle and Kobe’s aerospace and IT industries.

Check back periodically for updates, photos, and videos from Mayor Hisamoto’s visit to San Francisco and Seattle. Read on for a photo stream of Mayor Hisamoto’s activities from the 11th through the 15th. 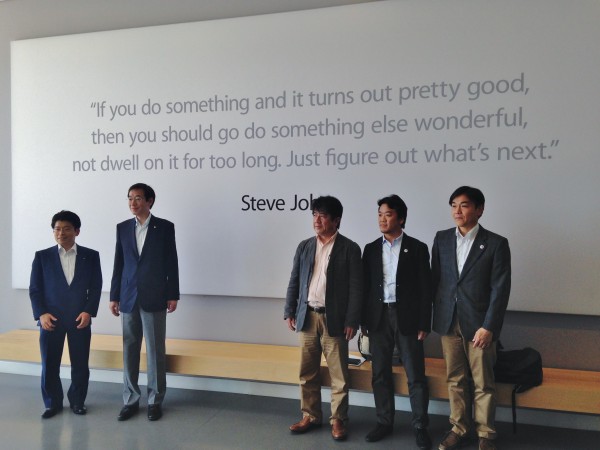 Mayor Hisamoto (2nd on left) and members of the Kobe delegation at Apple in Cupertino, CA 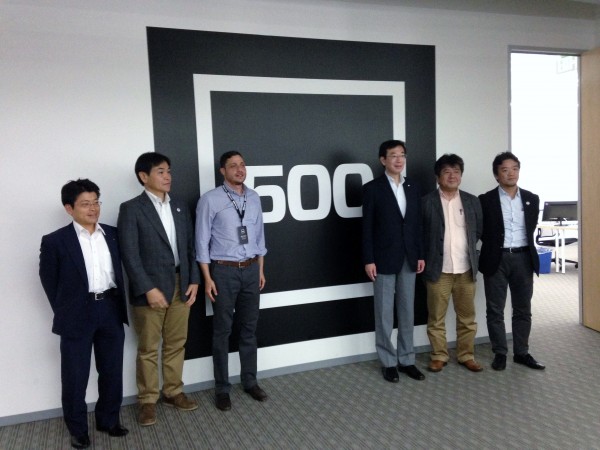 Mayor Hisamoto (3rd from right) and members of the Kobe delegation stand with Zafer Younis, a Venture Partner at 500 Startups 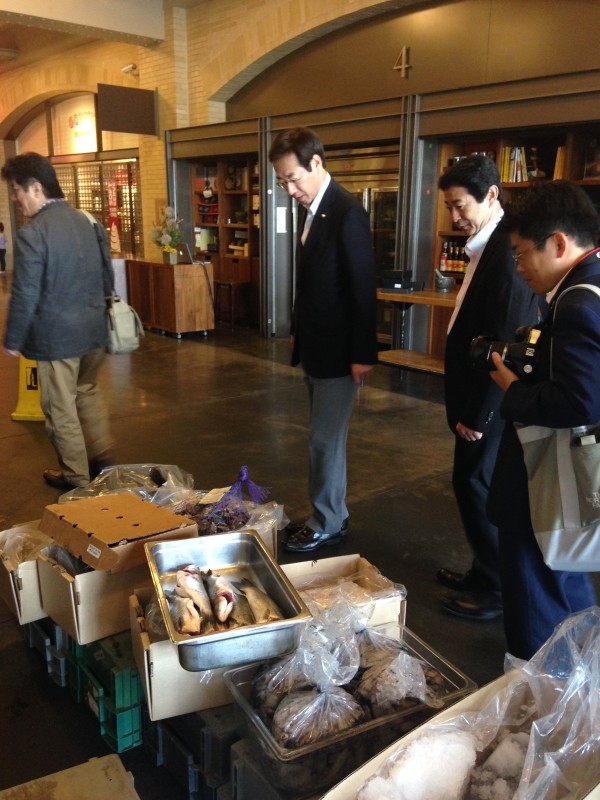 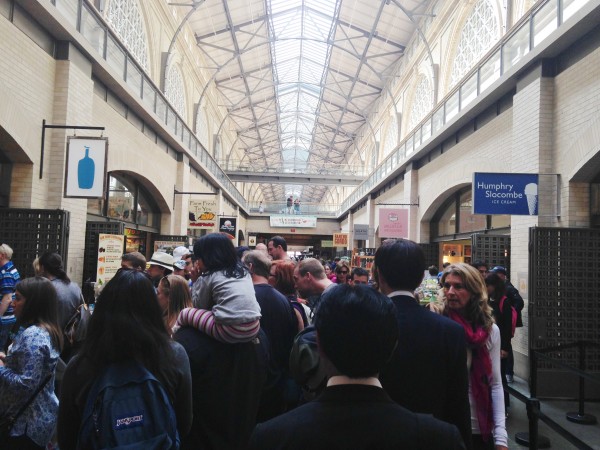 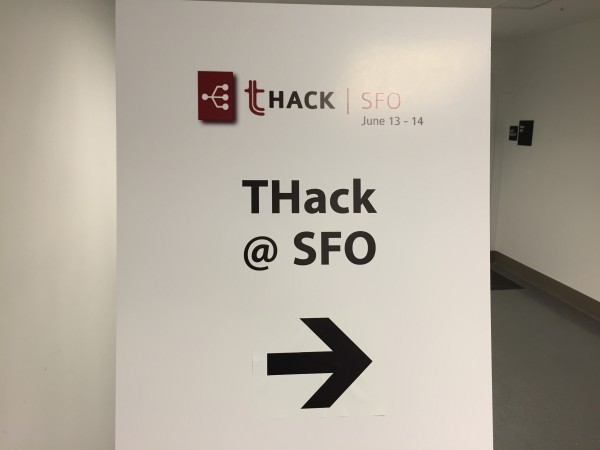 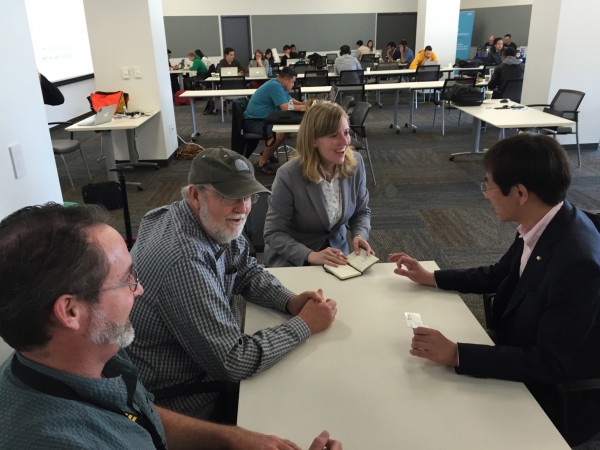 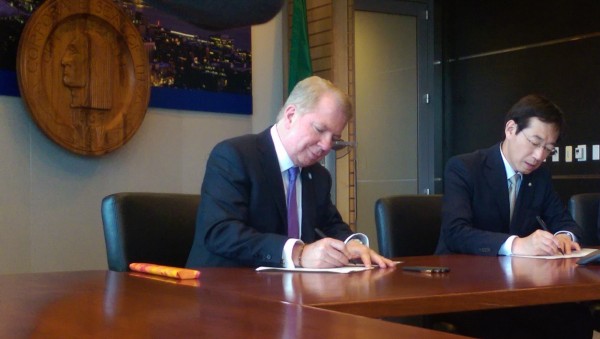 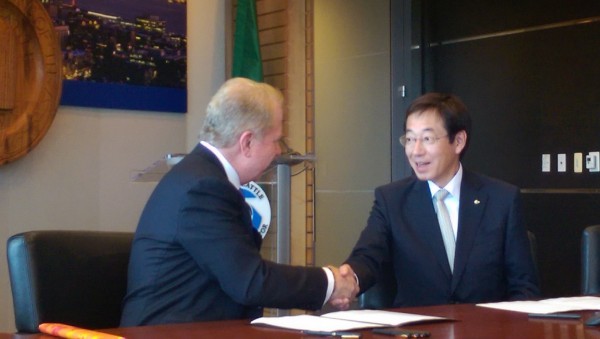 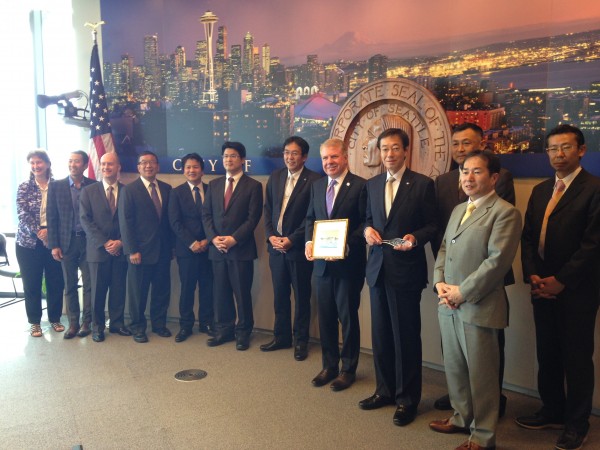 Mayors Murray and Hisamoto after the signing the Letter of Intent at City Hall, Seattle, WA 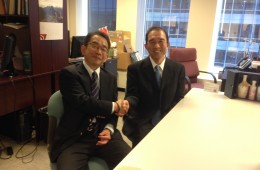 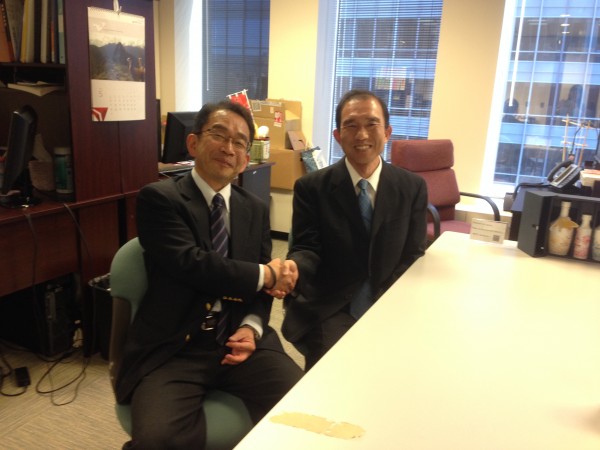 Welcome to our homepage. I am Tetsuya Sometani, the newly assigned Director for Kobe Trade Information Office (KTIO).

Seattle has been a very special place for me. More than 20 years ago, when Japan was in the midst of a bubble economy, I was a graduate student studying at the University of Washington, where I obtained an MBA. Yes, I am a husky! Time goes by quickly. I am amazed by so many changes and development since then.

On April 1st, KTIO moved and merged into the office of Hyogo Business & Cultural Center (HBCC).  I am looking forward to collaborating with HBCC to remain close and to grow our business together. (in the photo, shown right, HBCC’s new Director, Mr. Kawachi)

This year, the focus of KTIO will take a different direction to more business side rather than cultural exchange side.  It will be quite a challenge; however, I am thrilled for this opportunity and ready to start my new journey.

Being back here after 20 years of absence, I get bewildered in a long-forgotten environment.  Yet, I am so excited to be here to bring something valuable and meaningful for both city of Kobe and Seattle.  I will do my best and I appreciate all of your support.

As of April 1st, 2015, Kobe Trade information Office has moved into the space of Hyogo Business and Cultural Center where is located to old suite. The director, Masao Kakiuchi, has returned to Kobe as of March 31st. A new director, Tetsuya Sometani, will be arriving in Seattle around the beginning of May. We look forward to your continued cooperation in the future.