In December 1956, a request to form a long-term partnership between Seattle and Kobe was proposed to the Kobe Public Relations Office by Clifton B. Foster of the United States. The Kobe City Mayor at the time expressed an interest in such a partnership and sent an inquiry as to whether the interest was mutual for Seattle.

Seattle formally replied that they too sought such a relationship in May 1957 and in June of the same year, the partnership was born.

Kobe City held an official ceremony to welcome and formally begin the relationship on October 21, 1957, with Mr. Griffith Way representing the delegation sent by Seattle. Seattle also had an official ceremony on November 20, 1957, attended by the mayors of both cities as well as officials from their respective chambers of trade and commerce.

Today, the relationship remains strong between the two cities. For example, every year Kobe and Seattle send each other the winners of their own Jazz Queen try-outs and the winner goes to perform in the other country. Seattle and Kobe also elect a representative to serve in their sister city’s celebrations: Seattle hosts an event called Seafair in July and August whilst Kobe puts on the Kobe Festival in May.

Please check out the Seattle-Kobe Sister City Association for news and information on upcoming events and volunteer opportunities.

Important Events in the Seattle-Kobe Relationship

The Kobe Trade Information Office, the US Branch of Kobe City, opens in Seattle, WA.

Seattle’s World Fair displays a miniature model of Kobe City and various goods from Kobe. Kobe also presents a friendship bell and its accompanying structure, known today as the Kobe Bell in the Seattle Center gardens

The Kobe Municipal Arboretum opens their “Seattle Forest” section, complete with about 40 different species of trees. The Seattle Mayor attended the opening ceremony.

The Kobe Mayor attended the opening ceremony of Kobe Terrace Park in the International District of Seattle. Inside the park are a four-ton Yukimidoro stone lantern and cherry trees, gifts given to Seattle by their sister city of Kobe.

Students from Garfield and Roosevelt High Schools in Seattle go to Kobe and play with the Kobe Philharmonic Orchestra. For the event they were named the, “Garfield Roosevelt Japan Orchestra.”

The Kobe-Seattle High School Student Exchange Program (also called the Ambassadors Program) begins. Students from Seattle go to Kobe to stay with a host family, visit a nearby school, go sightseeing, etc. Students from Kobe come to Seattle and do the same. The program was funded from 2001 to 2003 in part by Starbucks Japan. Every time the Mariners pitcher Kazuhiro Sasaki completed a save, Starbucks Japan made a donation.

The 45th anniversary of the Seattle-Kobe sister city relationship. In July, Kobe Mayor Tatsuo Yada comes to Seattle and participates in the Seafair Torchlight Parade. In November, Seattle Mayor Greg Nickels goes to Kobe; a commemorative photo is taken as part of the exchange.

32 members of the Trade Development Alliance of Greater Seattle go to Kobe, are welcomed by Kobe Mayor Tatsuo Yada, and participate in a dual city trade and investment seminar.

The 55th anniversary of the Seattle-Kobe sister city relationship. Seattle Deputy Mayor Darryl Smith and a delegation of 47 people visited Kobe and participated in various memorial events, including the Kobe Festival parade.

Kobe Mayor Tatsuo Yada, Chair of the Kobe City Assembly Takemitsu Fujiwara, and a delegation of 60 people came to Seattle and participated in a number of events to commemorate the 55th Anniversary, such as the Seafair Torchlight Parade. 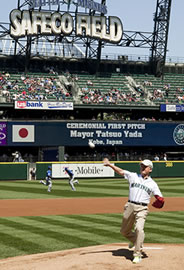 Gifts from Seattle to Kobe:

The Seattle-Kobe Sister City Association (SKSCA) is a non-profit association headquartered in Seattle that helps promote and facilitate friendly relations between Seattle and Seattle’s sister city of Kobe, Japan.

The Kobe-Seattle Sister City Association is a volunteer association headquartered in Kobe working to encourage friendship and exchanges between Kobe and Kobe’s sister city of Seattle, WA.